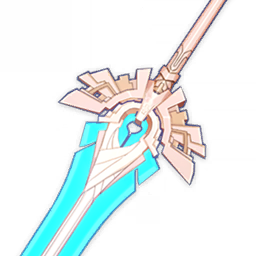 A claymore that symbolizes the pride of Dvalin soaring through the skies. When swung, it emits a deep hum as the full force of Dvalin's command of the sky and the wind is unleashed.

This is a tale of sky-shaking valor.

Lost its dark, metallic wings to Anemo's pride and joy.

Long ago, the shadow dragon Durin terrorized Mondstadt, driven by jealousy for the city's glory.

Awoken from his sylvan slumber by the cries of Durin's victims,

The Anemo Archon came forth and summoned his faithful servant to his side.

For life and for freedom, the Archon and the Wind Dragon rode the wind to face their foe.

In a battle that ripped clouds from the skies, Dvalin spread his six blessed wings wide,

Severing the sky and tearing through Durin's iron scales with the force of a colossal blade.

As the conflict plunged the world into darkness, the Wind Dragon struck out with his claws, like swords forged of wind.

The battle shook the heavens, even the sun quaked with fear.

Finally, Dvalin tore out Durin's throat with his teeth, and the evil dragon fell from the sky.

With his god's blessing, the Wind Dragon seized victory and saved the people of Mondstadt.

Yet Dvalin became poisoned by the tainted blood he had consumed, and corruption seeped into his bones.

Though a hero, Dvalin was forced to suffer in solitude, while the stench of corruption drew creatures of evil to his side.

Deceived by the Abyss, the Wind Dragon fell to evil, and Stormterror was born.

At last, his master returned to calm his frenzied mind and ease his pain.

His faithful friend and a new companion fought bravely to drive out the monsters and restore Dvalin's honor.

In the century while Dvalin slept, his image faded from Mondstadt's memory,

But in the tumultuous times of the recent past, the people bore witness to his six-winged figure once more.

Now, blessed by the Anemo Archon, serenaded by the songs of Barbatos,

Riding on the boundless winds, Dvalin takes to the skies once more.