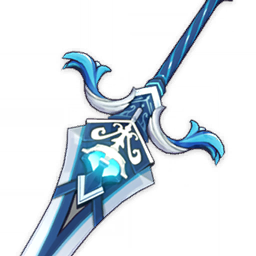 A ceremonial greatsword that has become petrified over time. The trinkets on it are still visible. It grants the wielder the power to withstand the winds of time.

On the cliff facing the eastern sea, the ancestors worshiped the masters of Time and Anemo together.

The two are intimately related, as expressed in the saying, "Anemo brings stories while Time nurtures them."

The sword tells a story of war, and was used in the enactment of war tales.

Originally just a prop, its blade has been hardened by the passage of time.

This sword once belonged to the Imunlaukr Clan, a clan of brave and gifted warriors who fought hard and died young.

In sacrificial ceremonies, they would enact duels between brave warriors stained black with blood.

In the eyes of the Imunlaukr Clan, combat existed not for protection, for glory, or for gaining territory.

Rather, it was for the amusement of the gods, high up in the heavens, for whom little else could serve to entertain.

Monsters and outlaws, they fought them all the same, with no regard for whether this time they would return to their beloveds afterwards.

For none of that mattered. What mattered was to roar, loud and clear, in the heat of bloody battle. That was duty fulfilled.

Such hot blood running through the veins should not have been conducive to a long history for the Imunlaukr Clan.

For their fight was one without end, and without hope of victory.

And yet, as the snow slowly melted and Mondstadt began to take shape, gradually they realized: They had found something to fight for at last.