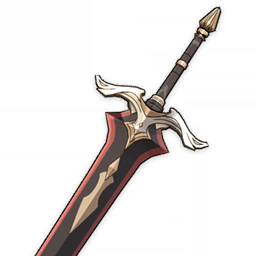 A steel sword that is said to have been coated with dragon blood, rendering it invulnerable to damage. This effect is not extended to its wielder, however.

Legend says that after slaying the venomous dragon,

The famed hero bathed in its blood, for he desired invulnerability.

Sure enough, he became untouchable.

Be it swords, be it spears, or be it rain of arrows,

He laughed and shrugged them off.

And now, his back bore a great weak spot, the very shape and size of that sword.