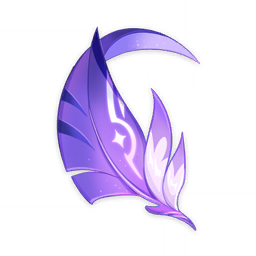 It may be able to trigger some wondrous effects if used on Tsurumi Island.

Take this feather with you into the world.

You did promise him that you would, after all.

A feather left behind by the Thunderbird that once obliterated Tsurumi Island. It is filled with many memories and much power.

The people dwelling within the island fog worshiped the being whose light they could see even through the shroud all around them, and the feathers that fell from the Thunderbird also became the basis for the now-lost Tsurumi instrument, the Maushiro.

Due to a change, the Thunderbird would eventually annihilate all civilization on the island, and it would later itself be slain over Seirai Island.