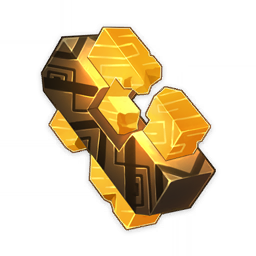 Some kind of fragment recovered after defeating the Overlord of the Vortex in battle.

In the ancient past, it was used to pin the great beast down.

There once was a time when the inhabitants of this land were terrorized by waves as tall as mountains, torn from their dreams in the dead of night by the deafening roar of tidal waves that would shake the world to its core. Fear of such horrors gradually subsided over the years as peace became the norm.

But no matter: though That Which Lies In The Deep awakens once more, it is powerless to prevent the dawning of a new era.

Perhaps this is just what the one who suppressed the Overlord of the Vortex has been hoping to witness in the millennia since.