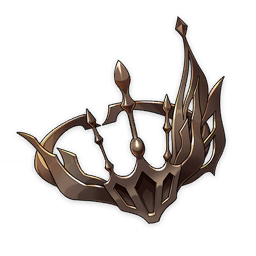 A trophy obtained from defeating Signora, Eighth of the Fatui Harbingers.

The Fatui often face the world from behind their masks, and it is said that this is because all they once were mean nothing once they become Fatui, and thus must they forsake their true names and faces alike.

—Yet the act of giving up all that makes up an "I" — one's past and the bonds that come with it — is no mean feat.

Perhaps it is fair to say that only those who possess an obsession close to or even exceeding the level of delusion might be willing to join this group that so rebels against the Heavenly Principles, binding their remaining days to their Delusions and burning as brightly as stars.

...Of course, many within the Fatui are simply consumed by power and are simple sadists — nor are these states necessarily in conflict.

The woman whose real name was Rosalyne-Kruzchka Lohefalter may have once led a more innocent, naive existence.

But that was before her eyes were filled with a raging fire, and her innocent days were burned away. Before the icy Delusion extinguished the flaming tongues that ever gnawed her. Before the frozen might that protected her was shattered by the eternal outlander, unbound yet no less determined than she was, causing the flames to burst forth once more...