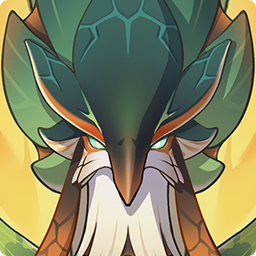 Over many long years, this large fungal beast has morphed into a unique form.

Its intelligence has already reached and perhaps has even surpassed real animals, and it will actively hunt prey to obtain sustenance. Its tail has a lovely jade plumage that seems very similar to that of the ancient sacred beast that the Spantamad school reveres. As far as the logic of mimesis is concerned, it seems quite likely that the two beings once walked the earth together.